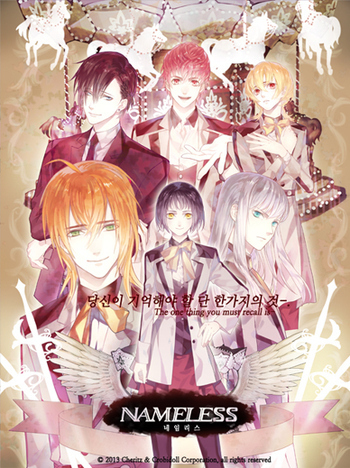 Eri's been having a rough few years. Her parents are scientists who are continually overseas and only speak to her a few times a year and ever since the grandfather who raised her passed away, she's been living entirely on her own. Her life largely centers on a hobby she's undertaken to combat her loneliness: collecting ball-jointed dolls

. In particular, she buys from the brand Crobidoll, which she feels adds something extra and almost human-like to their dolls. Eri's five Crobidolls are the center of her life: she spends the vast majority of her money and free time taking care of them, and has fallen into the habit of talking to them about her day and her feelings to stave off loneliness. While she's made two close friends since starting high school, boisterous class president Soi and the stoic model Shinbi, she's not comfortable sharing her hobby with them, afraid of the accompanying social stigma.

Then one day, she wakes up to find that five young men have seemingly appeared in her house overnight, each matching the appearance of one of her dolls: cold and reserved Lance, sweet and cute Yeonho, flirty and sophisticated Yuri, kind and mature Tei, and boisterous and straightforward Red. The men all remember being dolls and seem to have personalities reflexive of the "concept" Crobidoll released them with, but have no idea why or how they've become human. Because Eri lives in the apartment beneath the school principal, it's only a matter of time before they're discovered. They concoct a back story about being recently-immigrated family friends and begin attending school with Eri. Thus begins Eri's newly complicated school life, having to balance five Bishōnen while a sinister cloud hangs over their sudden appearance...

Nameless - The One Thing You Must Recall - is a Visual Novel Otome Game made by Cheritz, who also developed the similar game Dandelion, although Nameless is not stat-based. It is fully voiced in Korean, but has been officially released in English.