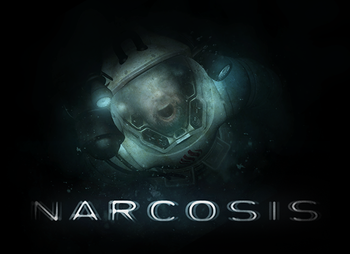 Check your gear, trust your training.
"The suit keeps out what you need to be afraid of. Only the fear's trapped in there with you, and it's thriving."
— The sole survivor
Advertisement:

Narcosis is a First-Person Survival Horror game developed by the studio Honor Code and released on March 28th, 2017 for PC, PlayStation 4, and Xbox One.

You work as an engineer at Oceanova, a cutting-edge undersea methane-mining complex over two miles down and thousands of miles from shore, when an 8.0 earthquake hits 50 miles away, sending shock waves and currents that devastate the mining complex. This makes life more difficult.

As you to struggle to make your way through the crumbling habitats and methane fields to find other survivors and a means of escape, you need to contend with a variety of hazards. Whether it's breached methane pipes or the unforgiving deep sea environment, from agitated wildlife to narcosis-and-stress-induced hallucinations, it won't be easy getting to the surface.

Fortunately, you're wearing an ADS, a high-tech, heavy-duty industrial dive suit with flares, flashlights, and thrusters - cheerfully nicknamed a walking coffin. Of course, with oxygen at a premium and the situation swiftly going From Bad to Worse, your survival isn't guaranteed, and that nickname may prove to be more fitting than you'd like...