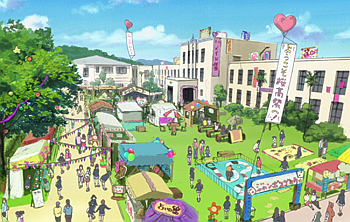 It's highly likely that any manga or anime set primarily in a school will have an episode or even arc taking place during the school's annual cultural festival (an important part of the Japanese Education System). The wackier the story and the larger the campus, the more elaborate and strange the festival will be.

Each homeroom class will put on some sort of event to demonstrate the students' talents; the two most common involve turning a classroom either into a small cafe (kissaten), or a Haunted House (obakeyashiki). This itself has become such an ingrained part of the trope that it is rare to see any other possibilities discussed when a class is trying to decide what to do for their participation in the festival, but carnival games and student-crafts shops crop up from time to time. Student clubs will also participate, generally creating club-theme-related attractions in hopes of attracting future recruits. Theme costumes will be commonplace.

May involve a School Play.

Paralleling the cultural festival is, of course, the athletics festival, in which students compete in track and field events and other outdoor activities. Besides footraces, the most iconic events are the "fetch race" (a kind of Scavenger Hunt), the bread-eating contest (a run to buns suspended from an overhead line), the beanbag throw (a crowd throwing color-coded beanbags into a high basket, with winner determined by quantity), and the mock cavalry battle (three students hold up a fourth, and the object is to 'unhorse' the opposing teams). Besides competition at the student-to-student level, the students are also organized into teams (usually by classes or clubs), and the winners of events also score points for their team, leading to a great victory or defeat for the protagonists.

Either event may culminate in an evening bonfire and folk dance, to the lilting strains of "Turkey in the Straw."

Shuchi'in Academy's Devoted Hearts Culture Festival starts off with a bang, and serves as the backdrop for the final quarter of the the third season.

Shuchi'in Academy's Devoted Hearts Culture Festival starts off with a bang, and serves as the backdrop for the final quarter of the the third season.