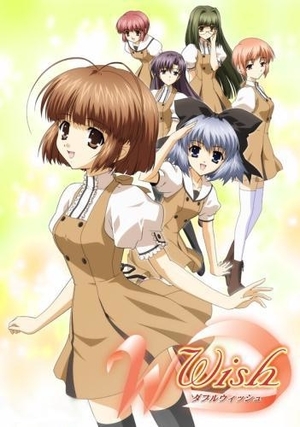 "Senna, we can make pleasent memories anytime anywhere."
— Junna
"You don't remember them because they are the memories that you need to forget Onii-chan.."
— Senna
"Everything that Senna did... she did for my sake..."
— Junna
Advertisement:

W~Wish~ (pronounced Double Wish) is about a boy, Junna Tōno (遠野潤和, Tōno Junna), who has a twin sister named Senna Tōno (遠野泉奈, Tōno Senna). He is an Ordinary High-School Student at Sakurahama Private High School happily living with his twin. However, in the past, a traffic accident deprived him of his parents and his memory. Junna survived the accident and since then, he lived only with his sister alone in a house. Senna and Junna support and rely on each other, and due to this Senna is very fond of her Onii-chan.

Junna's present life with Senna at the same high school is so pleasant that he can forget his severe past. However, Junna begins to recall the memories he lost in the accident. He enjoys the happy and pleasant days, but he is tossed by his past, his present, and his future.

Then one day a girl named Haruhi Inohara (井ノ原春陽, Inohara Haruhi) transfers, claiming to be his childhood friend but later to be his younger sister who he suddenly remembers. Who is his actual sister, Haruhi or Senna? What is the truth hidden in his memory?

A Princess Soft Visual Novel, it was adapted into a 13 half-length episodes series which aired alongside Final Approach (also from Princess Soft) during the "Princess Hour."