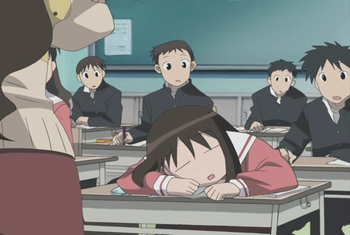 The textbook may not be interesting, but it sure is comfortable.
"The only thing worse than waking up and having to go to school is waking up and being in school."
— Digimon Tamers
Advertisement:

High school and college students in fiction have pretty challenging lives, which can at times wreak havoc on their sleeping schedule. Whether they were up all night angsting about how to approach their first crush, spending all their free time in grueling training to fight the Big Bad, or simply having one too many panicked cram sessions the night before the exam, these characters will be forced to go to class the next day with little or no sleep. This often leads to them unintentionally catching up on their rest in the middle of class.

This is a common staple of school-related comedies, with the event often leading to the public embarrassment of the character in question. Offending students, if caught, will surely draw the ire of their teacher, which usually leads to the student being awakened by a stern chewing out or by having class supplies thrown at them. Sometimes the sleeper will become a victim of Face Doodling at the hands of their classmates; alternatively, they may give away the fact that they were asleep with a Waking Non Sequitur.

Particularly dedicated slackers may have glasses (or even full-face masks) drawn to imitate a wide-awake face. How well this works tends to vary.

In more serious stories this might be an indicator that the student is having trouble at home, whether due to abuse, being forced to take a job to help support the family, or some other reason. While it is less likely to be Played for Laughs in these kinds of stories, it can sometimes be used for comic relief.

A common consequence of being a teenage Triple Shifter. Characters who repeatedly fall Asleep In Class (and other places) are Sleepy Heads. Not to be confused with Sleep Learning, which is the practice of trying to absorb knowledge while asleep or hypnotized. Naturally, teenagers can often feel the need for sleep enough to doze off in a class that may seem boring and meaningless, so this trope is Truth in Television.