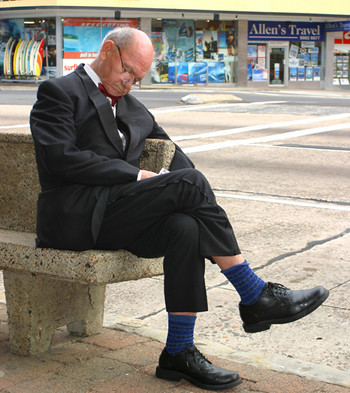 What's worse—falling asleep in public, or the leg cramp he's going to have when he wakes up?
"Please, let me rest. I'm sleep deprived. I only slept for 16 hours last night. I'm so sleepy..." (yawn)
—Sages with the "Idle" personality, Disgaea 5: Alliance of Vengeance
Advertisement:

Everyone has had an experience where they've dozed off at an inopportune moment. However, a select few of us, both in real life and in fiction, raise this odd habit to an art form, becoming the official Sleepyhead of their social circle.

These characters have a habit of nodding off anywhere, at any time. They constantly end up at the last stop on the train/bus because they fell asleep on the journey, the teacher routinely throws things at them because their snoring is getting in the way of the lesson, and their friends spend half their lives prodding them awake... or at least hauling them into a vertical position so that no one notices that they're actually unconscious.

There are two main character types that are prone to having the sleepyhead trait. The first is the Cloudcuckoolander, and it's part of their social inappropriateness schtick. They couldn't care less if they get caught sleeping, and may complain about being disturbed. Other characters, however, often yell at them and tell them to be more responsible.

The other sleepyhead is the hardworking-but-kinda-dim character, and unlike their more eccentric cousins, this is a source of major embarrassment for them. They'll blush and stammer when woken up, but by contrast, other characters usually see it as an endearing trait. Unlike the Cloudcuckoolander, whose snoozle-fits reflect their dissatisfaction with/divorce from reality, the implication with an earnest character is that they put so much of themselves into everything they do that they wear themselves out.

Both types will have exaggerated reactions to the things that naturally cause sleepiness, like a full stomach or a warm day. In anime at least, this character tends to be female.

These characters seem to sleep pretty well at night. Characters who pull all-nighters and then go thwump at an inopportune time don't come under this trope — that's just exhaustion, while a sleepyhead will get a good eight hours and still doze off in Biology class. The sleepyhead really likes their bedtime, and under times of stress will usually be heard complaining that they're tired, or longing aloud for a pillow. They are often distinguished by their Dreary Half-Lidded Eyes and Exhausted Eyebags. Their bedroom is often filled with creature comforts, tons of stuffed toys, and the world's comfiest bed.

Occasionally they will actually have narcolepsy, or another real-life medical condition causing excessive daytime sleepiness

A Sleepyhead may or may not be a Heavy Sleeper and it may or may not overlap with Really Fond of Sleeping. They're probably Not a Morning Person as well — the eccentric type will be grumpy, and the earnest type completely out of it when the alarm clock goes. Senior Sleep Cycle is when this trope gets treated as an inherent trait of old people. If depressed or otherwise mentally ill, they might be a Sleepy Depressive.

Contrast The Insomniac, who wants to sleep but finds it elusive despite the lack of "external" interference (e.g. noise); and The Sleepless, who simply lacks the need to sleep.