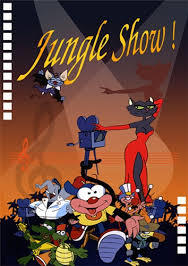 Listen to me, everybody, YEAH!!
Everybody!
Advertisement:

The Jungle Show is an French animated series that aired in December of 1996.

The show revolved around a group of Funny Animals who get together to make a series of music shows. Each one revolves around a different musical style for each character.

The show lasted a total of 26 episodes, and can be viewed on YouTube.

The Jungle Show contains examples of: