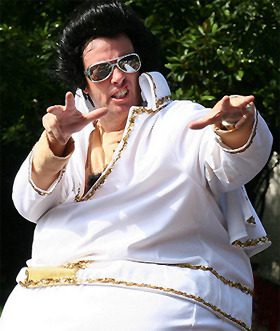 Uh huh, the resemblance is uncanny.
"If life was fair, Elvis would be alive and all the impersonators would be dead."
— Johnny Carson
Advertisement:

Most often can be found overseeing marriages in Las Vegas, the Elvis Impersonator (a subtype of Celebrity Impersonator) usually dresses and acts like late era Elvis Presley: portly, with an exaggerated pompadour hairdo, wearing a ridiculously pimped out jacket, and fond of saying "thankyewverymuch".

Impersonators of "young" Elvis (i.e. slim and wearing the gold lamé suit) do exist but, for whatever reason, are not as common in fiction.

A subtrope of this appears a lot in dubs of Japanese media. Because the pompadour is considered Delinquent Hair and most associated with bike gangs, a lot of minor or comedic villains get that hairstyle. In the process of dubbing, they're often turned into (nearly) the only thing Westerners associate with pompadours. Additionally, Elvis has always been very popular in Japan.

The Other Wiki lists three types of Elvis impersonators — look-alikes, sound-alikes, and combinations — who tend to be either professionals, amateurs, Just For Fun types, or those who do their routines for comedy and/or parody. They also state that the earliest known Elvis impersonator was a Canadian teenager who started making stage appearances in 1956.

If Elvis Lives, expect him to participate in an Elvis impersonator contest at some point... and come in last.

Elvish Presley is the totally logical subtrope where the impersonator is an elf.

Well, if you're fighting musically-themed boss zombies, it's only fitting that they would end on a zombie themed on the king of rock and roll.

Well, if you're fighting musically-themed boss zombies, it's only fitting that they would end on a zombie themed on the king of rock and roll.