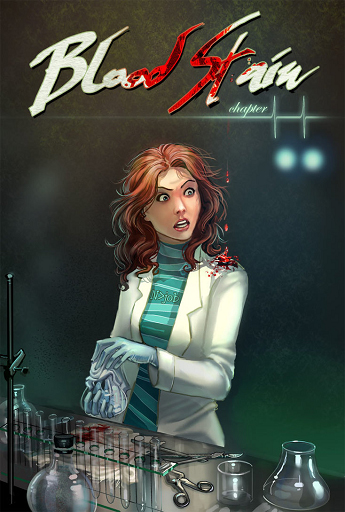 "Somewhere in the asscrack of the Mediterranean sea..."

) is a Slice of Life webcomic centered around Elliot Torres, a chemistry major who has been searching for a stable job for two years. After being let go from a multitude of jobs for various reasons, she resorts to applying for a job rumored to be offered by a Mad Scientist. It turns out, despite first impressions, there's nothing to fear from the so-rumored employer, Dr. Vlad Stein. Instead, both Elliot and Dr. Stein learn from each other's situations while going through a plethora of humorous events along the way.

Linda Luksic Sejic is also known for her work in Grimm Fairy Tales and is married to Stjepan Sejic, another professional comic artist with a webcomic.

Starting in 2016, it was picked up by Image Comics for printing and distribution, which had also published several of Stjepan's previous works, including his own webcomic Sunstone, which shares a universe with Blood Stain. It still remains free to read and view on Linda's DeviantArt.