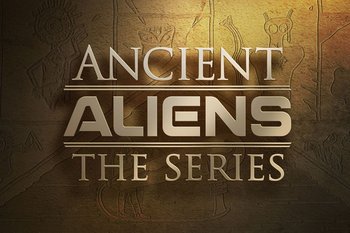 Come for the ridiculous hair, stay for the apophenia.
"Is such a thing even possible? Yes, it is!"
— Giorgio A. Tsoukalos note No, it's not.
Advertisement:

Probably the most infamous example of The History Channel's Network Decay, Ancient Aliens is a program that deals with conspiracy theories about aliens. Taking a glance at a list of episodes reveals that—as far as this show is concerned—aliens did everything. No really, literally everything—they exterminated the dinosaurs, they influenced all major religions, and they were in contact with all ancient cultures. Nazis, the Old West, Atlantis, Greek Fire, Stonehenge, King Arthur, all influenced by aliens.

The show is known for having frequent appearances by Giorgio A. Tsoukalos

, consulting producer and ancient astronaut researcher. More specifically, it's known for the involvement of Giorgio A. Tsoukalos' hair.

In July 2014, it received a pseudo spin-off called "In Search of Aliens", hosted exclusively by Tsoukalos as he explores the globe looking for evidence of aliens. It's just as outlandish and silly as the original; for example, offering the theory that the Loch Ness Monster is an alien craft docking at an alien base built beneath the lake.