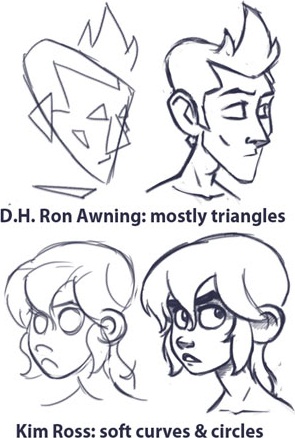 "Masculine Lines, Feminine Curves" is a visual trope about the marked difference in how men and women are drawn in artwork and animation. Males—be they human(oid), robot, or animal—will have more angular faces, square jaws, and broad, square shoulders. Meanwhile, females will have smoother, rounder faces and curvaceous bodies.
Advertisement:

In humans, this trope is somewhat true to life. The differences between male and female physiology generally revolve around bearing and nurturing young; the average adult human woman has more fat than a man of the same size, which functions as fuel reserves for a developing baby during pregnancy. This means there's technically no reason for a female robot or non-mammalian creature to look this way; it's just our brains' visual cue telling us "This android/alien/whatever is female."

Female bird and mammal characters in the lower end of the Sliding Scale of Anthropomorphism (from Nearly Normal Animal to Funny Animal) often sport a ruff of feathers or fur at chest level that serves as an analogue for womens' breasts, in a manner that approaches Non-Mammal Mammaries. Female characters might also be given Hartman Hips.

This is a foundational trope for character design in comics, and extremely pervasive with human characters. It's very common for male and female characters to be clearly differentiated with exaggerated straight-line/curved line designs to the point where we don't even notice any more.

For animal examples, please only list examples that are both on the same (or at very similar) level(s) on the Sliding Scale of Anthropomorphism; examples where female animals are actually more anthropomorphic than male animals and not merely more curvaceous go under Humanoid Female Animal. See also Bizarre Sexual Dimorphism and Cute Monster Girl when females of nonhuman species are drawn to be "pretty" compared to the male's more bestial/monstrous look.