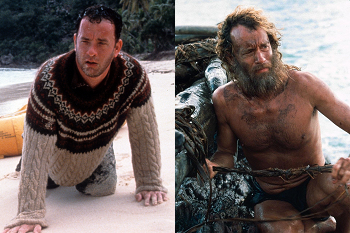 "With the long hours at a hospital, you don't have a lot of time to worry about your appearance."
— JD, Scrubs, "My Clean Break"
Advertisement:

This trope is about characters who, for various reasons, don't have time for the usual grooming rituals or to keep their personal space tidy. It can be a one-time thing (to show a given character is under pressure or has become obsessed with something) or part of their normal characterisation. Either way, they have something other than their appearance on their mind.

The reasons for this can be external; events out of the character's control are keeping them from a nice warm shower. Or they can be internal; the person in question has let their appearance slide because they're more interested in what they're doing. The former can either emphasise the significance of what they're doing (i.e. their job's hard) or suggest that the character's having difficulty dealing with it (i.e. they're bad at their job). The latter tends to simply mark the character out as devoted to their job (or whatever it is they're doing) and is far more likely to be Played for Laughs. Although it can still be Played for Drama, especially when it's motivated by guilt.

Characters who frequently show this trait include the Defective Detective (and their more well-adjusted colleagues when the situation's really serious), the Salaryman/White Collar Worker (especially if they're a Beleaguered Bureaucrat), The Atoner, Workaholics and the Absent-Minded Professor. The Panicky Expectant Father is an example of the "one-time" variation (although looking after their new offspring might make the trope stick). It can also be a sign of a Bunny-Ears Lawyer, Sanity Slippage, Villainous Breakdown, and the reason somebody's a Genius Slob. Someone who Must Have Caffeine will often display this trope with or without the two being connected (in the former case, it might be cleared up after they've had their fix). Plot-Powered Stamina tends to have this as a side effect when it's being played more realistically.

This is, obviously, Truth in Television; Your personal appearance needs daily maintenance (clean clothes, washing, combing hair, shaving, etc.), so it's usually the first thing to slip when someone's pressed for time.

Supertrope to Messy Hair and Einstein Hair (which specifically marks someone as a Mad Scientist). Compare Fashionable Asymmetry and Rummage Sale Reject for other wardrobe problems, Beard of Sorrow and Mess of Woe for depression-induced deterioration, and Forgets to Eat. Contrast The Pigpen (who's a mess because they're lazy rather than busy) and the more positive Adrenaline Makeover.