Fanfic / Towards the Sun 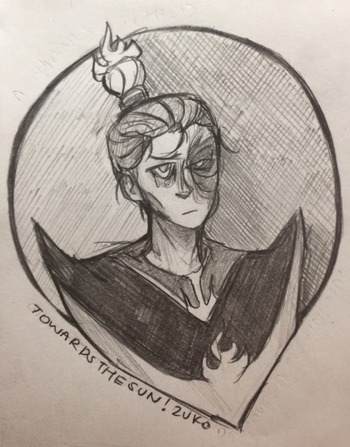 They'll overthrow him when they're good and ready, put him back in his cell where he can get some real sleep or execute him and then he won't be tired anymore. Until then, he'll just keep... being Fire Lord. note Art by novellpc original source here

Zuko is captured and imprisoned by Ozai when he fails to escape in time after their confrontation in the Day of Black Sun. With that, everything changed.

With Ozai is defeated, depowered and imprisoned by the Earth Kingdom and Azula falling into madness, the Fire Nation has no ruler. In desperation, the generals and Zuko's own jailers release him from his imprisonment and install him on the throne.

Knowing that he was the literal last choice for ruler, Zuko decides to do his best in keeping the Fire Nation from falling apart until his generals finally overthrow him. Then he can finally rest.

Although keeping a nation that warred for a hundred years stable is easier said than done. Complicating things is the start of peace conferences, with the Avatar and Gaang acting as representatives for their respective nations and his Uncle Iroh, whom Zuko betrayed for his nation back in Ba Sing Se, who's now the Avatar's firebending teacher.

is an Avatar: The Last Airbender Fanfic exploring a For Want of a Nail Season Four "Zuko never joined the Gaang, and he's really bad at being good" AU. For other examples of their work see Cheating At Pai Sho, Salvage and Little Zuko v the World.