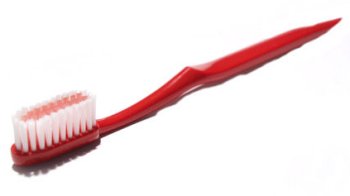 Whether you're brushing your teeth or killing a snitch, make this your tool of choice!
"This shank is a classic. The bottom end of a toothbrush is carved down to its sharpest point, almost like an arrowhead. But the best part is, the weapon doesn't have to be concealed. It can be placed in a pocket, bristles showing. Ready to be grabbed for action!"
— Augustus Hill, Oz
Advertisement:

Prison is a brutal place filled with the worst that society has to offer. So how best to emphasize this violent nature to the viewers to draw big ratings? Show some random guy get stabbed in the kidneys with a sharpened toothbrush and left to bleed to death on the floor.

Shivs (also known as shanks, chivs or chibs - the names are interchangeablenote "chib" is mostly used in Scotland) are a common staple of most shows relating to the goings-on inside a prison, most often used for the purpose of trying to kill another inmate, either as an ordered hit for someone that's high up or as retribution for something that the designated target did at a prior point. Bonus points if they come out during a Prison Riot. Some inmates construct and carry shivs for the purpose of protecting themselves from violence. However, this is rarely shown, and even if it was, the punishment is the same, no matter what the reason it was made.

Because of the restrictive nature of prisons, shivs tend to be made of just about anything, ranging from the simple (such as a sharpened toothbrush) to the elaborate (a 6-foot-long pole made from tightly wrapped paper equipped with a sharpened steel tip) to the truly disturbing (two razor blades taped side by side and capable of making grievous wounds that are notoriously hard to stitch up) to the ingenious (papier maché made from newspapers that can later be flushed). The construction of shivs remains a constant tug of war between the prisons attempting to stop the behavior with newer and greater restrictions, and the ingenuity of prisoners finding ways around said restrictions to continue their deadly art. See MacGyvering.

This is a case of Truth in Television; however, it's drastically underportrayed, as real prisons have displays showcasing hundreds of Improvised Weapons made from the most innocuous of everyday materials.

However the weapon and trope isn't completely exclusive to prisons and its inhabitants. This trope is very common in other settings, such as post-societal collapse scenarios. Where making all sorts of stabbing and slashing implements are pretty common, thanks to the fact that they don't have to worry about getting caught (although the shivs and shanks will still be hidden as an Emergency Weapon) and also because sometime most of the actual knives are either broken or rusty as all hell. In fact it's also a place where the shanks can be either as normal (like say just a sharp metal object with something wrapped around the handle) or as weird as it gets (thanks to imaginative minds and lots of tools at disposal). Another common setting is a more primal or survival-focused scenario, where making tools and weapons out of anything will help you survive. Naturally this means lots of improvised knives or shanks, either made from sharpening sticks, stones, scrap metal and even bones. Just so you can have a small and sharp tool or weapon that's pretty versatile in the right hands.

Not to be confused with Healing Shiv. See also Sinister Switchblade and Sinister Scythe, other sinister bladed weapons associated with unsavory people (usually). A sub-trope of Improvised Weapon. It may also overlap with Grievous Bottley Harm, if the broken bottle is used as a shank.