Licked by the Dog 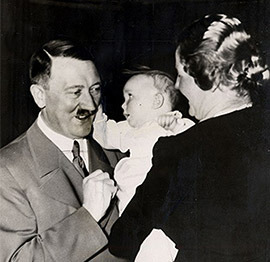 Remember...babies are usually not good judges of character.
"Thank you, scary leather man. I love you."
— A small girl (upon getting her cat back from Midnighter), The Authority
Advertisement:

A subtler version of Pet the Dog, where an innocent creature like an animal or child shows affection towards someone commonly thought to be mean or a hardass, or who at least has a Face of a Thug. Said hardass doesn't always appreciate the attention.

Effective at deflating a character's pompous attitude. An ironic but overused trope is the character hating a certain kind of animal, then finding one who can't take the hint.

Sometimes this is introduced later in the plot as a Morality Pet. Compare Evil-Detecting Dog and Friend to All Living Things. Contrast Animals Hate Him. See Photo Op with the Dog, where someone tries to invoke this trope via a picture.