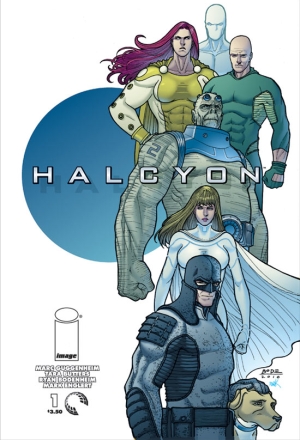 "Every villain is the hero of their own story."
Advertisement:

Halcyon, originally announced under the name of Utopian, is a superhero comic published by Image Comics, premiering in November of 2010.

The premise seems simple: what would superheroes do without crime? Super-team Halcyon is destined to find out - their world has mysteriously become 'nicer' exponentially over the last nine months. Crime is practically at an end. Armed conflict has diminished to the point on non-existence. The 'would be ruler of the world' and Halcyon's primary enemy just turned himself in on television.

What happens to them now? Are they out of a job?

The series is co-written by Marc Guggenheim (Amazing Spider-Man) and Tara Butters (Reaper) with art by Ryan Bodenheim (Red Mass for Mars) and Alisa Tager (Serenity).