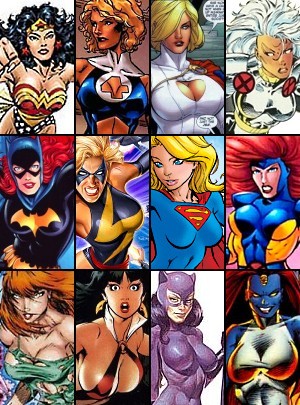 Comics like big busts, and they cannot lie.note From left to right, top to bottom: Wonder Woman, the Invisible Woman, Power Girl, Storm, Batgirl, Ms. Marvel, Supergirl, Jean Grey, Caitlin Fairchild, Vampirella, Catwoman, and Mystique.
Hobbes: Is Amazon Girl's super power the ability to squeeze that figure into that suit?
Calvin: Nah, they all can do that.
— Calvin and Hobbes, July 22, 1992

Whether the superheroine/villainess is a mutant, an amazon princess or a Human Alien, if she's female, she is straining against the bonds of gravity... but not in a flying sort of way.

This most common of metahuman attributes seems to range from a D-cup size upward for any character just past the onset of puberty (a time when many comic-book characters start to manifest superpowers). They are not only large, but remarkably self-supporting and perky for their size. Naturally, this means that women in live-action adaptations won't have the same figures as the source material.

Common because Most Artists Are Male, of course, which is why this rarely involves My Eyes Are Up Here.

One theory behind this phenomenon in comics that American superheroes are drawn in a "larger than life" artstyle. Heroes are supposed to look dynamic and impressive, villains look evil and shady, and thus women are sometimes drawn to accentuate any womanly features far more heavily than a realistic style would. (And yes, to the extent this is true, there is a Double Standard at work here that males aren't depicted as super-manly men nearly as frequently.)

Please limit examples to justifications, lampshades, and Played for Laughs.