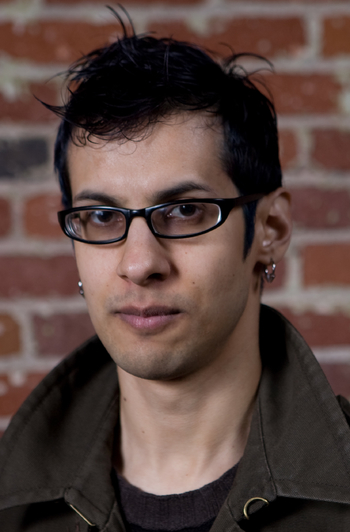 One of the rare cases where his hair actually has a somewhat normal hue.
"EVERYTHING is funny. So long as you know it's a joke nothing is offensive. YOU try to protect people from wising up and getting beyond the idiotic shock and into a place where they can see how ridiculous things are. Do I think rape and abortion is funny? FUCK NO!! Jeezus! But Aborto and Rape-bo? HELL YES!"
— Jhonen Vasquez getting on his soapbox in Fillerbunny 3.
Advertisement:
"Someone once said to me 'Jhonen, why do you make up so much shit on your Twitter?

' and I just strangled the bastard with my tentacle arms."

Vasquez's characters are disturbed people living in a Crapsack World. A wildly hilarious one. His most notable characters include a violently schizophrenic serial killer, an unstable megalomaniacal extraterrestrial, an abused and terminally terrified child, and a tortured and suicidal bunny rabbit. Just to name a few. His jokes mostly involve very stupid people getting horribly maimed, tortured, yelled at, mocked and patronized. He's also quite fond of Doomy Dooms of Doom. He's also known for his art style, featuring highly geometric characters with bold outlines.

Works created by Jhonen Vasquez, or has had his involvement, include:

Tropes commonly associated with his works include: