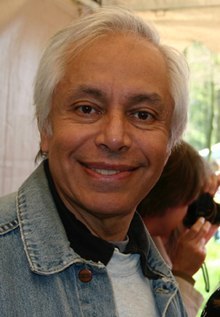 Alone or in conjunction with his wife, Julie Bell, Vallejo has provided dozens of covers for fantasy/sf paperbacks, and posters for films such as Barbarella, National Lampoon's Vacation, and the ''Aqua Teen Hunger Force'' movie

You've probably seen at least one of Vallejo's works, which often feature muscular men and attractive women in states of near-total undress, and no background. His characteristic imagery has been highly influential within the fantasy genre, particularly with the covers he painted for Conan the Barbarian and other such works.

Vallejo's work is often confused with that of Frank Frazetta, as the two artists have/had similar styles, and both worked on Conan and a couple of other projects.

Most links on this page lead to images that are at least slightly NSFW (some more than others) so beware.