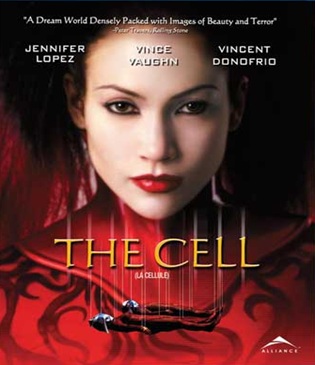 "And what world do you live in?"
— Carl Stargher
Advertisement:

The Cell is a 2000 sci-fi psychological-thriller/horror film directed by Tarsem Singh. It stars Jennifer Lopez, Vincent D'Onofrio and Vince Vaughn. It is Tarsem's feature-length film debut; he previously directed music videos such as R.E.M.'s "Losing My Religion."

J-Lo is a child psychiatrist named Catherine Deane who is pioneering a device which allows her to enter people's minds by rendering them as virtual environments. Vaughn plays FBI Special Agent Peter Novak who is hunting Carl Stargher (D'Onofrio), a serial killer with a habit of drowning his victims in an elaborate trap. Just as Carl is apprehended at his house, he falls into an irreversible coma. He cannot be questioned as to the whereabouts of his latest victim, who is due to be drowned.

Carl is wheeled to Catherine's clinic so that she can venture inside his mind and coax his inner self into spilling the girl's location. Catherine learns that Carl's mind is split between the traumatized boy he is at heart and the demon-king he is outwardly. Eventually, she becomes trapped in Carl's mind, and Novak goes in after her, as turning off the VR machine would kill her.

All this is interspersed with seemingly random imagery. None of this is given a great deal of exposition regarding what it all means. Some critics have espoused that none of it means anything and is in the movie solely to look pretty.

In 2006, Singh would go on to release the better received, but equally visually impressive film, The Fall.

An In Name Only Direct-to-DVD sequel was released in 2009. The film is also notable as the last English-language film released on Laserdisc.