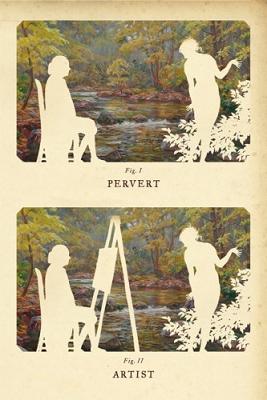 A helpful guide.note Pervert vs. Artist by Wilhelm Staehle

.
"I shall not today attempt further to define the kinds of material I understand to be embraced within that shorthand description ['hard-core pornography']; and perhaps I could never succeed in intelligibly doing so. But I know it when I see it, and the motion picture involved in this case is not that."
— Supreme Court Justice Potter Stewart, concurring in Jacobellis v. Ohio, commenting on Les Amants.

note The quote would turn into a Never Live It Down moment for Justice Stewart as no one remembers that he consistently voted against censorship, including the very case from the quote. But then again, maybe Stewart was being facetiously serious about his ability to distinguish pornography; he was a young naval officer stationed in Casablanca during WWII, and one of his jobs as watch officer was to confiscate the locally-produced hardcore pornography his seamen (stop sniggering) tried to smuggle in.
Advertisement:

Sure, it's got lots of naked people in suggestive poses on full display. But it's thoroughly artistic — I swear! Therefore it can't be considered pornography, and it doesn't matter that it's hidden under my bed.

Pornographic works carry a considerable stigma in the U.S. and (to a lesser extent) in other Western countries. However, a lot of classic works of art contain nudity (and, occasionally, sex acts). For this reason, legally a work of art is not considered pornographic under U.S. obscenity laws; what constitutes "artistic merit" is left somewhat vague.

One result is that fictional characters (and occasionally real people) will try to get away with reading, watching, or creating something that most people would consider pornographic by claiming that the item in question is really a "work of art". For teenage boys (the usual claimant) this never works. Occasionally it's the "artist" making the claim, in which case he or she may or may not get away with it. Bonus points if he insists that the fault is in the viewer, who has a dirty mind.

open/close all folders
Anime & Manga
Art
Comics
Fanfiction
Films — Live Action
Literature
Live Action TV
Music
Radio
Theatre
Video Games
Web Comics
Web Original
Narrator: "Possession of nudity in all forms makes you a pervy loser worthy of mocking and ridicule. (Unless it's an oil painting, a sculpture, or soft-focus photograph, then that's art and therefore perfectly acceptable. But you're not permitted to be aroused by that in any way.)''
Western Animation
Real Life