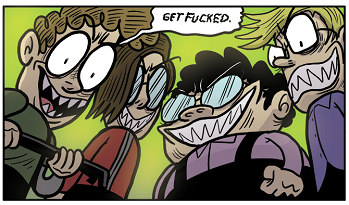 We assure you, they're only this terrifying 30% of the time.note From left to right: Clyde, Dave, Mort, Mark
Advertisement:

A slice-of-life web comic that was, originally, just a recurring sideplot in KC Green's Gunshow. It focuses on the four dweeby teenagers that comprise the titular high school Anime Club: Mort, Mark, Dave, and the newest member, Clyde.

A five part web-comic (not including the original strips, a very short Part 2.5, and a non canon Part Six,) it's a short but highly recommended read. It can be found here.

A Fan Vid series has started

by the people who did the Hiimdaisy Persona 4 fandub, and is probably even more hilarious.