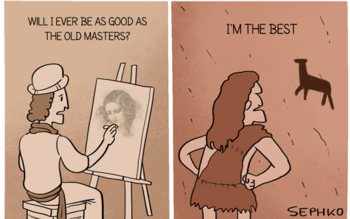 "Since brass, nor stone, nor earth, nor boundless sea,
But sad mortality o'ersways their power,
How with this rage shall beauty hold a plea,
Whose action is no stronger than a flower?
O how shall summer's honey breath hold out
Against the wrackful siege of batt'ring days,
When rocks impregnable are not so stout,
Nor gates of steel so strong but time decays?
O fearful meditation! Where, alack,
Shall time's best jewel from time's chest lie hid?
Or what strong hand can hold his swift foot back?
Or who his spoil or beauty can forbid?
O none, unless this miracle have might,
That in black ink my love may still shine bright."
— William Shakespeare, Sonnet 65
Advertisement:

Apart from sales and contemporary reviews, some people hold that the real test and highest honor of any work is "the test of time". Over generations, time filters art and leaves only works that are worth caring about. The older an artwork is, the better it is. The ability of a work of art to endure after the death of an artist, across languages and cultures rather than his hometown and to still have meaning over the years and centuries is its true merit. The fact that Greek Tragedy and Homeric epics still have resonance and value two thousand years after they were written testifies to their greatness. Indeed to the more romantically inclined, art offers the only real immortality human beings can aspire to.

This trope is related to Uniqueness Value: when there is only one complete poem of Sappho's that survives, it is a treasure, a lone survivor against the teeth of time. It is unique and irreplaceable, a fragment of a lost era. The fact that Sappho wrote in and for a world that no longer exists also means that her poems and fragments are rendered abstract, and require study to fully understand — therefore, this trope can also invoke True Art Is Incomprehensible.

This trope ignores that although the "test of time" is often reliable, it is not perfect, nor is it without complications.

Also, the fact that something has survived does not guarantee that it is good. A work may have been preserved for other reasons. Maybe it flattered the sorts of people who were rich enough to ensure that the work was copied and preserved, for instance. Maybe it was held up as the symbol of some particular group or philosophy which was powerful enough to make the work last. Maybe it just survived by accident.

Conversely, the works that we lost weren't necessarily bad. Remember: Lost works are lost, and if they're lost then we can't exactly judge them on the merits, can we? There might be any number of gems that were lost to time for one reason or another. Maybe the creator criticized some powerful people and they burned all her works. Maybe the work expressed ideas that would be considered very wise in the present day, but in the author's time those ideas were considered scandalous and thus nobody paid any attention to them and nobody bothered to preserve them. And again, maybe it was just bad luck.

Copying and preserving art was much more difficult back in the day compared with the modern digital era, so there might have been only 10 copies of a given book and they all got caught in a fire or a flood or whatnot, and who knows whether the work was good or bad?

Works that have endured still often come to us without their original context, which can create doubt about the work's meaning. Sometimes it's not clear if the author had a brilliant idea or if we modern readers are interpreting an idea that wasn't actually intended. (Conversely, something that seems pointless to us may actually have been brilliant within its original context. Any number of puns, references and symbols may be lost on modern audiences.) Some of these interpretations come to us via translators, and some are just audiences themselves coming at the work with their own ideas and perspectives.

What if the only complete poem of Sappho was a first draft and thus incomplete, or something she considered an Old Shame? Later generations may typically depend on translations being easily produced, and having copious remaining works from an artist. Further, posthumous evaluation can fluctuate over time. Euripides is a dramatist praised today for his strong female characters, but in the Athens of his day, not only were women forbidden to act, but women were forbidden to even see the plays, and were likewise enshrined by law to remain immured indoors (with exceptions only made to prostitutes of certain respectable standing). That his female characters are three-dimensional does not necessarily mean that they were intended for the women of his day, and the fact that women of later centuries appreciated it is something that almost no one in the Ancient World would have predicted and anticipated (because, again, it was an extremely misogynist society). It must bear in mind that the literate audience and the reading public (which is not always the same thing) have only increased in number from yesteryear to the present-day. In the classical age from Ancient Athens to Rome, the number of people who had literacy were a tiny part of the populace, and among those, the kind who appreciated art was even smaller. It is inarguable, as classicist Mary Beard has pointed out, that The Aeneid is read by more people on any given day in the late-20th and early 21st Century than at any time in The Roman Empire. The really popular art of the Ancient World, the one people did know involved the oral tradition, stuff like Aesop's fables, more than Homer, and while Aesop is also considered great, few would consider him as great as Homer, despite the fact that many of Aesop's fables via adaptation and/or Bowdlerization reaches a much bigger global audience of small children than Homer's epics do.

Furthermore, an overly strict adherence to this trope can result in a mindset that views any art that originates after a certain point to be lesser than that which precedes it. In addition, from a purely statistical basis (due to population growth, improved leisure time, et cetera), it is empirically true that there are more contemporary works of art today than have been created in the earlier days of human history. Even taking into account the number of works from previous eras that no longer exist, there were still comparatively few compared with how many are produced today. Artists in any medium working today have far more competition, fight and compete for a larger share of the civilized, literate, and regular public, than the small circle of educated patrons and well-wishers in the Ancient World, and in a large sense their work is more disposable than that of the old masters.

Compare Nostalgia Filter, which is this trope on a smaller timescale.