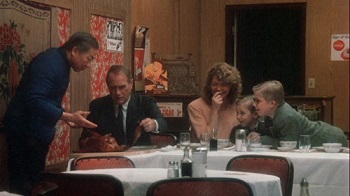 The Parkers eat "Chinese turkey."
Sen. Lindsay Graham: Nah, I'm just asking where you were at on Christmas.
Solicitor General Elena Kagan: [laughs] You know, like all Jews, I was probably at a Chinese restaurant.
[Laughter from crowd]
Graham: Great answer!
Sen. Patrick Leahy: I could just see that one coming...
Sen. Chuck Schumernote Himself Jewish: They're the only places open.
— Senate confirmation hearings for Supreme Court Justice Elena Kagan, 2010
Advertisement:

It's Christmas! Hooray! Hoorah! Lights everywhere! Presents! Family gatherings! And to top it off, a massive home-cooked dinner.

You're Jewish (and not of the Informed sect). Or Muslim. Or atheist. Or The Grinch. Or you're estranged from your family, or simply don't have a family. Or you're a hungry Jehovah's Witness looking for a quick bite after the meeting. Or a pack of dogs just ate the massive home-cooked dinner. Or you need a quick solution because you either burned the roast when you attempted to use Oven Logic, or it's still frozen solid because you (or your less domesticated spouse) failed to take it out of the freezer in a timely manner. Or you're just plain alone and bored. Or you're going to be out of town for several days and don't want to waste the food.

Whatever it is, the usual Christmas festivities are simply not possible for you. It's just another miserable winter's day, except that since you're off work (if you're lucky) you have even less to do than usual.

What are you supposed to do? Well, you could go out... but virtually everything is closed.

There's that one Chinese place in town. It's still open! Grateful to find any human contact, you order the Peking duck and gorge yourself. Bonus points if you bond with the owners despite a language barrier. It's a happy Christmas for you after all!

This has historically been Truth in Television. It is almost a tradition in some (non-Orthodox) Jewish circles to eat Chinese and go to the movies on Christmas. Note that this generally does not apply to chain restaurants serving Chinese food, which typically close for Christmas like everything else.