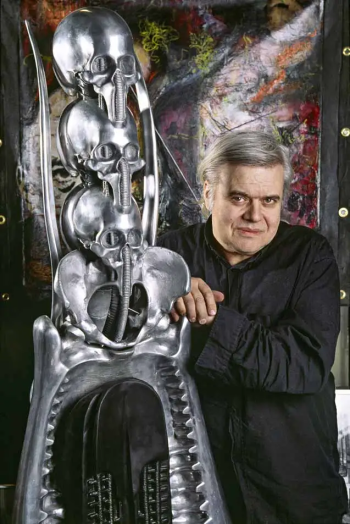 Known for his works' disquieting, biomechanical, often sexual imagery, Giger achieved much of his fame from his work in films as a Science Fiction set and creature designer. Among the film projects he worked on were Alien, Alien³, Dune (1984), Poltergeist II: The Other Side, Species, and Prometheus, which actually dusted off some unused concepts from a Pre-David Lynch Dune film that never got off the ground. Before this he provided two paintings for Emerson, Lake & Palmer's album Brain Salad Surgery, one of which had to be airbrushed for purposes of censorship. The Dead Kennedys included a poster of his painting Penis Landscape with their album Frankenchrist — for which they got in a little trouble, Danzig used his art for the cover of Danzig III: How the Gods Kill, and Celtic Frost used his painting Satan I for the cover of their seminal album To Mega Therion.

Giger also contributed art to the Dark Seed games, has a number of bars in Switzerland themed after his art (which are probably nice, comfortable places to get a drink), and designed incredibly menacing furniture.

Giger sadly passed away in May 2014 after sustaining injuries in a fall. Here's a comic of him seeing Hell for the first time

. Too bad it's subjective Hell.

And his name's pronounced GHEE-ger.

Common themes in Giger's work include: