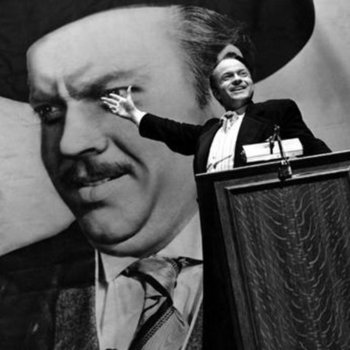 Hey, have you seen Citizen Kane? You probably should; it's practically the Citizen Kane of film.
"Rosebud..."
— Charles Foster Kane
Advertisement:

Citizen Kane is a 1941 film, produced by RKO Pictures and Mercury Films. It is Orson Welles' first feature, and he produced, co-wrote (with Herman J. Mankiewicz), directed and played the leading role as Charles Foster Kane.

Inside his unfinished palatial mansion, media mogul Charles Foster Kane lies Dying Alone, having lived in seclusion from the world for many years. With his final breath, he utters the word "Rosebud." The movie unfolds in flashback as Intrepid Reporter Jerry Thompson tries to unravel the significance of Kane's dying declaration through interviewing those who knew him. However, no one he talks to knows just who or what Rosebud was, the closest answer he gets is from Kane's butler who concludes he was just saying a nonsense word. Thompson never does solve the mystery, though the answer is shown to the audience in the final scene. The conclusion? It is indeed Lonely at the Top.

Welles' debut film was the product of a unique contract that gave him full Auteur License and "final cut" approval.note It was a really rare privilege and unheard-of for a first-time director back then, and even today. He had been an avant-garde theatre director and radio star, and his first film as a director was a technical breakthrough in cinematic storytelling and pioneered several achievements in cinematography, set design and special effects. The film was also controversial for its protagonist's thinly-veiled resemblance to real-life media mogul William Randolph Hearst, who subsequently moved to sabotage its release

It is also the Trope Codifier and indirect Trope Namer for It Was His Sled.

Represented the film debut and Star-Making Role not just of Welles but of most of his Mercury Theatre troupe that came with him to Hollywood. Joseph Cotten, who plays Kane's best friend Jed Leland, became a major star. Agnes Moorehead, who went on to enjoy a long career as a character actress, plays young Kane's mother in the opening sequence. Bernard Herrmann, who was the composer for Welles' The Mercury Theatre on the Air radio show, became one of the most famous composers in Hollywood history. Future A-lister Alan Ladd can be seen as the reporter smoking a pipe (he's talking with Thompson in the last scene). Robert Wise, who later enjoyed a hugely successful career as a director, did the editing.

The Truth about Rosebud

The characters never learn what "Rosebud" means, but we, the audience, do.

The Truth about Rosebud

The characters never learn what "Rosebud" means, but we, the audience, do.