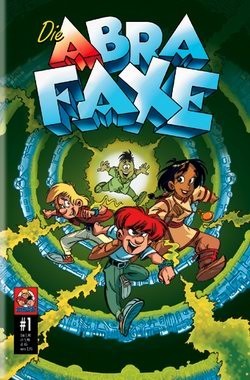 Die Abrafaxe are a trio of kobold-like characters designed by artist Lona Rietschel and writer Lothar Dräger. They have been having adventures across time since their debut in January 1976 in the relaunch of the East German comic-book magazine Mosaik, which netted them an entry in the Guinness Book of Records for the longest continuing comic-book story. They consist of dashing Abrafax, smart Brabax and chubby enjoyer of the fine things in life Califax. Since issue No. 200 they are accompanied by a nameless rat. With the Abrafaxe Mosaik continued to go from strength to strength, reaching a maximum print run of a million copies in 1984 (the total population of the GDR then numbered 17 million); it also successfully mastered the transition to capitalism after 1990. They continue to appear in Mosaik and various spin-offs, and since 2008 there is a quarterly spin-off series featuring their distaff counterparts, Mosaik: Die unglaublichen Abenteuer von Anna, Bella und Caramella ("The Incredible Adventures of Anna, Bella and Caramella"). In both versions the protagonists get from one historical era to another via time portals for which they sometimes have to search a long time.

Both versions feature child-friendly adventures with a big helping of humour and education. Thus an issue of Mosaik will always contain, besides the monthly episode of the saga, some illustrated text features that deal with aspects of the country and historical era it is set in, from biology to, e. g. the legal status and living conditions of slaves during the Roman Empire or Latin words that entered the German language.

The adventures of the Abrafaxe have been translated into a number of foreign languages including Catalan, Chinese, Greek, Hungarian (Hungary is the series' most successful market outside of Germany), Russian, and Spanish, but so far not into English. Two Abrafaxe graphic novels were published in Welsh, though. German-speakers can consult the Mosapedia