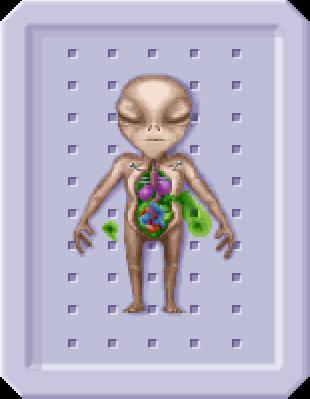 Remember, class, this counts for 25% of your biology grade.
Grey 1: If the military get wind of this, it'll be scalpels and cameras and bloody weather balloons all over again.
Grey 2: Poor Glukx. He always wanted to be a celebrity...
— Bec & Kawl
Advertisement:

The post-mortem examination of an extra-terrestrial being, oftentimes winding up on video tape.

Whenever any aliens find their way to Earth, you can be pretty sure that human governments and scientists will want to study their Bizarre Alien Biologies. Naturally, if the alien creature is still alive, X-Ray and CT Scanning technology can, at least, allow for a sizable chunk of that information to be gained "humanely." However, if the alien subject is deceased, then doctors are going to be setting up E.T. for an up close and personal look of his insides on the nearest operating table.

This trope is one of The Newest Ones in the Book, with its modern form origins dating back to the mid-1990's when UFO Conspiracy Theorists began speculating that one such autopsy was performed in the wake of The Roswell Incident. The fact that the fifty-year anniversary of that event was approaching at the time, which led to increased coverage of the story in the media, surely helped spread the rumor, as did a video recording

Related to They Would Cut You Up, which would be more focused on the fears an alien or unique character would have about being subjected to human study and vivisection.