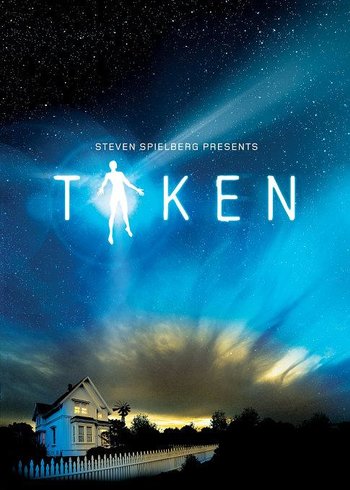 Taken is a Science Fiction miniseries made in 2002. It's about three families, beginning with Russell Keys (an Army Air Force pilot who is abducted by aliens in the middle of a battle), Owen Crawford (an Army Air Force captain who is the first from the military to see the crashed alien spaceship), and Sally Clarke (a woman trapped in an unhappy marriage who meets a strange man in her shed). Three generations of conflict unfolds from these events, and we, along with the characters, slowly learn the motives behind the abductions that have been going on for more than half a century.
Advertisement:

The miniseries focuses just as much on the characters as on the plot, as we watch them grow from children to adults.

Not to be confused with the 2017 NBC series Taken, which is a modern-day prequel to the Liam Neeson films of the same name.