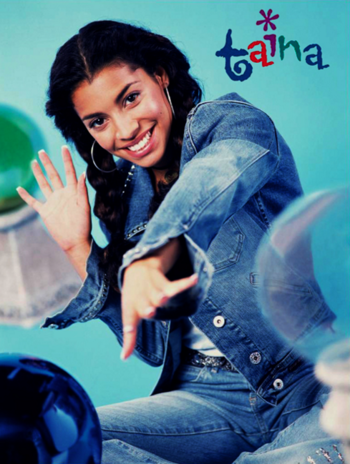 Taina was a Nickelodeon sitcom that aired between 2001 and 2002, and concerns a teenage girl who attends a performing arts school with her quirky friends, with dreams of becoming a superstar. Sound familiar? In fact, on This Very Wiki Taina is primarily remembered as "the show that Victorious ripped off years later." The series starred Christina Vidal as the titular character. The show ran for two seasons before being canceled by Nickelodeon due to rising production costs as well as the show's audience skewing too female for the network's liking.

This was the last sitcom that was filmed at Nickelodeon Studios in Orlando, Florida.

This is one of two Nickelodeon series to be distributed internationally by Nelvana, the other being The Fairly OddParents.

Tropes in Taina include: