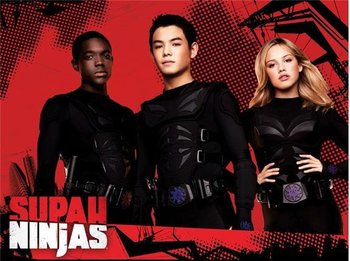 Supah Ninjas is a Nickelodeon live-action Ninja-themed show. Mike Fukanaga's grandfather (George Takei) recently passed away, but it's not long after that Mike (Ryan Potter) and his best friend Owen (Carlos Knight) discover that he took a few secrets to the grave with him after they find an entire secret ninja dojo under Mike's bed. Now it's up to Mike, Owen, and a the Love Interest Amanda (Gracie Dzienny) to fight off all the baddies who appear in their town. Also Mike's dead grandpa appears via hologram and trains him and his friends the same way everyone else in his family trained to be ninjas, excluding Owen's father, a cop, who must not know about all the secret business going on right under his nose.

Several story arcs tie into the plot as well, largely focusing on Mike's family's ninja background, and that not everyone uses their powers for good. However, you might find it hard to keep up with due to Nickelodeon never airing a single preview.