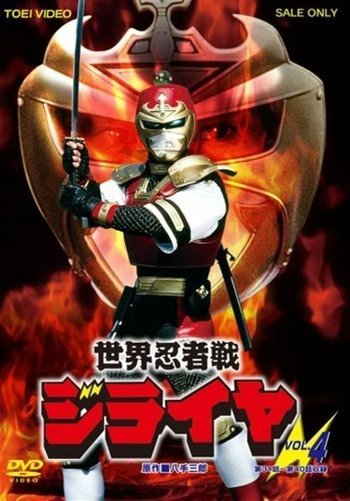 The original pop-cultured ninja (since 1988).
Advertisement:

Rather than being a Ridiculously Human Robot or a man in a Power Armor, Jiraiya (real name:Tōha Yamaji) is an elite ninja warrior from the Togakure style of Ninpō. His mentor and foster father Tetsuzan Yamaji, the 34th Grandmaster of the Togakure School, has trained him for the day the ancient Yōma Clan will return. Sure enough, the clan, led by Oninin Dokusai, arise with their army of evildoers in order to seize Pako, a mysterious treasure which came from outer space over 2000 years ago which is said to have power equiparable to the Sun. With the help of his family, and an army of international ninja heroes, Jiraiya must stand tall against the evil ones.

Although the series was not adapted into either VR Troopers or Big Bad Beetleborgs, Jiraiya has been adapted as Sheriff Skyfire in Power Rangers Ninja Steel. It's also available in its original form on Toei's Tokusatsu World channel