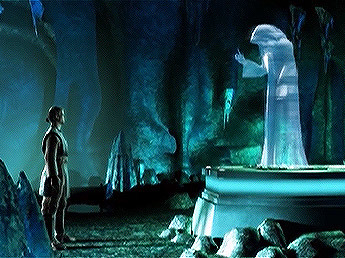 Star Wars holograms and Force ghosts are both pale blue. Coincidence? Probably.
"You could say I'm alive... in a way. Ultimately, I'm the afterimage of the mind that was Akihiko Kayaba. An echo."
— Akihiko Kayaba, Sword Art Online
Advertisement:

Death is a real bummer. Fortunately, in the future, we'll find a way around it. Using Science™ we will be able to squirrel away the mind of a dead or dying person in a computer, and digitally recreate them, or their consciousness, later as a Projected Man with holograms.

They may not be thrilled by this, but as they're dead, they don't get any say in the matter.

Usually overlaps with Intangible Man. If Cyberspace is involved, they will be corporeal in that plane.

In series with a Cool Starship, it's particularly common for a Virtual Ghost to end up running the ship, especially if they are female.

Interestingly a Virtual Ghost is technically just as much an AI as a robot, but even though they are essentially a computer with a preprogrammed human personality and (sometimes) the memories of a deceased person they will probably be treated different from other robots and computers. Whether the character is the same person as the dead character, or merely a piece of software that has been written to think it is, is a famous philosophical conundrum... that will almost certainly not be brought up in the series in question.

A Virtual Ghost can end up practically reincarnated if made out of Hard Light.

Can serve as the Sci-Fi version of the Spirit Advisor. Sister Trope to Living Memory. See also Hologram Projection Imperfection. Not to be confused with Haunted Technology, where a ghost inhabits technology by supernatural means. Compare with Digitized Hacker, which is a mind that has integrated with the internet. Compare and contrast with Artificial Afterlife, which often involves a copy of a person living on after their death in an "afterlife" that people have created for themselves.