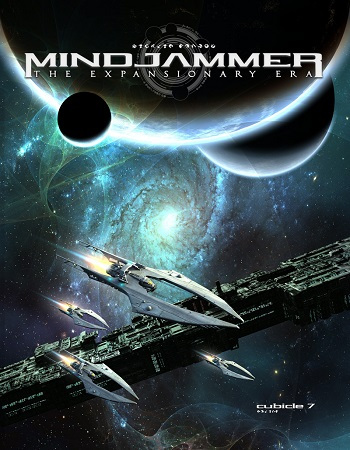 Mindjammer is a Science Fiction Tabletop RPG running on the rules set in the distant future New Commonality of Humankind. The game uses the Fate Core rules. A version using the Traveller rule set exists, too. The setting in general has been described as the established Traveller setting meets Eclipse Phase. There's also some Cordwainer Smith influence detectable in there.
Advertisement:

The backstory: ten thousand years ago Old Earth began to send out Generation Ships to colonize distant stars, followed by millennia of stagnation and decay. Two hundred years ago Earth discovered Planar drive, reinvented itself as the Commonality, and set out to spread civilization to its wayward colonies, with mixed results.

A large part of it is the Mindscape, a network that people communicate through and upload memories into via implants, and kept up to date across interstellar distances with ships known as Mindjammers.