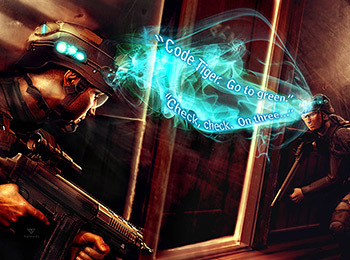 Electronic Telepathy, or e-telepathy, is a sub-trope of Telepathy. In most cases, characters using telepathic powers will do so by using some kind of supernatural force or a highly evolved biological mechanism that comes thanks to being a Sufficiently Advanced Alien. However, in some cases, a character will have no natural or supernatural telepathic ability and instead use a Brain/Computer Interface to gain this power. In this form of telepathy, thoughts are converted from impulses in the brain (electric activity produced by neuron reaction potentials) into digital signals that can then be broadcast artificially to another e-telepath using radio waves or some other form of wireless communication. Obviously, this can lead to Mental Fusion or even a Hive Mind, just as non-technological telepathy can.

This form of telepathy is different from others in that a person must be actively transmitting a signal in order for another to receive it. However, it is possible for an enterprising cyborg to "mind hack" another user of an implant and monitor their thoughts without their permission, similar to infecting a computer with spyware.