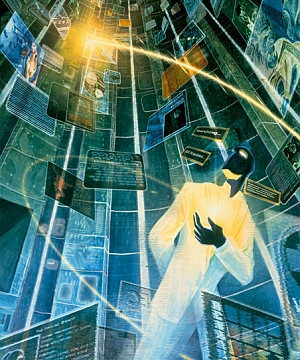 Where popups are still a problem.
Mari: What's the I.N.S.?
Satoru: It's a new form of communication. Computers exchange digital information with each other over fiber optic cables.
Mari: ...can it do video games?
— Miimu Iroiro Yume No Tabi
Advertisement:

The idea of networking computers together is as good as inherent to the idea of the computer itself. The first modern computer networks started appearing in the late 1950s and the early 1960s. From there it was only a short conceptual leap for science fiction writers to imagine a computer network on a global scale.

It wasn't until The '80s that what we now know as The Internet appeared, and it wasn't until The '90s and the Turn of the Millennium that it exploded into the mainstream. Writers aren't the types to just sit around and wait, however, and many began working Internet-like global computer networks into their fiction long before it became a part of everyday life.

In the hands of the more prescient among these writers, their fictional proto-Internets are nearly identical to what we now have in real life under a different name. The effects the Internet has had on society and the applications to which it's been put were anything but predictable, however. In the hands of writers whose imagination fell short of — or just went in a different direction than — reality, this can easily fall into Zeerust territory.

In some stories set in the future, a variation exists in which the Alternet is a fictional successor rather than alternative to the Internet we know. This is especially true in stories set After the End, in which the Internet has been destroyed and rebuilt, or in space, in which new technologies that alter the Internet's basic functionality are necessary in order to extend its reach beyond our planet.

Compare It's A Small Net After All, which is when what is purported to be the modern-day Internet works very differently in fiction than in Real Life.

No relation to the real Alternet,