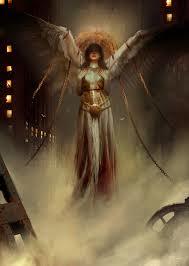 One of the least disturbing monsters you'll find.
Advertisement:

KULT is a Swedish Dark Fantasy/Splatterpunk (self-description) Role-Playing Game by authors Gunilla Jonsson and Michael Petersén. It takes place here and now, in the reality of today. But reality is not what we think. Around us the world is dark and dangerous and nothing is what it seems to be. Our reality is an illusion, created to keep us captive. We are imprisoned since the ages past by a dictatorial creator. The true world, invisible to us, is ruled by creatures who dominate the false facades, our prison wardens and torturers. And if your characters happen to steep too far into Evil, they might actually turn into monsters physically.

KULT can be used for any kind of horror game, from "splatter the attacking zombie hordes" to "solve the occult mysteries of the universe" to more subtle paranoia and conspiracies. Players play characters who somehow came into contact with darkness - whether purely theoretical, like students interested in the occult, Mad Scientists or Mad Artists; in reality, like muckrakers, private detectives or COPS; or actively fighting it, like soldiers, gang members or street fighters.

What can you do in KULT? You can fight evil... or become evil yourself... or simply go mad. Or outgrow such childish things as Good, Evil, Madness and Four-Dimensional Space-Time. But don't expect that to be easy.

A Powered by the Apocalypse reboot called KULT: Divinity Lost was released in 2018.

Warning: contains spoilers about the setting and characters.