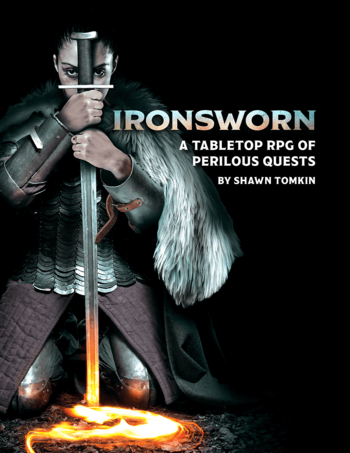 Are you ready to swear iron vows and see them fulfilled—no matter the cost?
Advertisement:

In Ironsworn, you play as an Ironsworn, a heroic adventurer who undertake perilous quests in the darkly fantastical Ironlands. Having fled the Old World, the Ironlanders inhabit isolated communities and endure the treacherous frontier of the Ironlands, defending against creatures, monsters, and horrors, along grappling with the Ironlands' original inhabitants, the firstborn. As an Ironsworn, your duty is to forge bonds with communities, explore the wilds, fight desperate battles, swear iron vows, and see through to it that those iron vows are fulfilled—or broken.

Ironsworn is a Tabletop RPG written and self-published Shawn Tomkin. Released in 2018, the game has garnered acclaim for not only for its high quality, but also for being free.

Most notably, it won an ENNIE in 2019 for Best Free Game. It also has a generous license and a system reference document (SRD) that allows others to borrow heavily from Ironsworn and commercially port it into different settings.

This tabletop game is Powered by the Apocalypse (PbtA), building from the design philosophy's fiction-first, moved-based, and principle-driven approach. Beyond that, Ironsworn makes some different decisions that sets it apart from its other PbtA kin.

The resolution mechanic is further affected by Momentum, inspired by the tabletop RPG City Of Judas by Davide Pignedoli. Momentum is an ever-changing value that a player can "burn" to cancel challenge dice, upgrading the result to a weak or even a strong hit. And if both challenge dice result in the same number? That's a Match, which means that a strong hit or miss will have a stronger effect.

A major appeal of Ironsworn is its Oracle system. Inspired by the Mythic Game Master Emulator, players can roll dice and consult setting-specific tables for inspiration on what happens next in the game. The Oracle offers guidance for GM-driven Guided play, but it also enables two (or more) player Co-Op play without a GM and even one-player Solo play.

Other notable mechanics include the progress roll, assets, and iron vows that drive quest creation and experience gains.

Beyond the core rulebook, Ironsworn have several expansions and supplements: