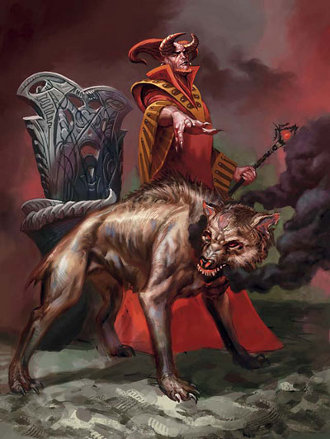 Asmodeus, Lord of Nessus and King of the Nine Hells.
"Know me then by my best name, mortal... YOU FACE DEMOGORGON! PRINCE OF DEMONS!"
— Demogorgon, Prince of Demons, Baldur's Gate II: Throne of Bhaal
Advertisement:

For whatever reasons there are these guys: usually with names taken from apocrypha, the Ars Goetia or The Divine Comedy, these guys can be described as Almost-Satan, for when the real deal isn't as fun to use. They're often given fancy titles and pretty much do whatever Satan would have done had he been present. Also, if you actually kill one or stop their schemes, it's still an accomplishment, but it's hardly a collapse of the demonic system. There will always be another to replace the one that falls. Perhaps even the killer. Keep in mind, killing one is a lot harder than it sounds, because miraculously driving one's Hit Points to zero usually involves Fighting a Shadow.

Common in all sorts of fantasy works, usually serving under a God of Evil (or possibly Satan himself) and usually plotting against them (they're demons, after all). May be the center of a Religion of Evil or the true identity of the being worshiped by a Path of Inspiration. This trope is the Evil Counterpart of the Council of Angels, although these guys tend to be a lot less likely to cooperate with each other. When the Enemy Civil War breaks out, they're the ones in charge of either side.

In battle, they will almost always be the most powerful demonic forces bar Satan himself. They often command Hellfire of far greater power than the demonic Mooks under them. Sometimes they are a Reality Warper, allowing them to make deals with mortals and grant them incredible power at an even greater price. Evil Is Not a Toy after all. They frequently wield pitchforks or staves into battle. They are also immune to what normal demons are weak to.

The Trope Namer is Dungeons & Dragons, where demons and devils are distinct beings ruled by demon lords and archdevils.

Compare and contrast The Legions of Hell for the grunts, Satan for the big guy himself, and Asmodeus, Baphomet, Beelzebub, Mammon and Mephistopheles, who are frequently confused with him. See also Our Demons Are Different. Much like deer, the size of their horns can denote their status. Typically also a Monster Lord or going by Maou the Demon King. See also, Elite Mooks.