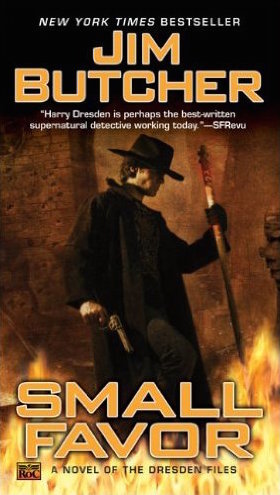 The second one with the Fallen.

After a year or so of peace and quiet, Mab, the Queen of Air and Darkness, monarch of the Winter Court of the Sidhe, comes back into Harry Dresden's life with a request. John Marcone, crime lord and Accorded Baron of Chicago, has been kidnapped by forces unknown, and Mab wants him freed. She demands that Harry act as her Emissary, and he isn't exactly given the option to refuse. Worse yet, the Summer Court found out about this before he did, meaning they're now trying to kill him before he does Mab's work.

Small Favor is book #10 in The Dresden Files.