Emissary from the Divine 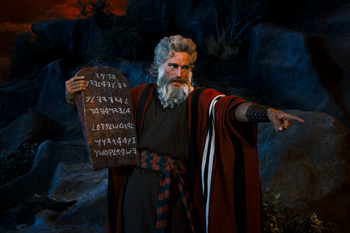 When a benevolent god or godlike figure chooses a lesser being to speak for them, their reasons for doing so will vary. Sometimes they're not omniscient enough to work alone. Sometimes, they're so alien they can't talk well to humans. Sometimes, whatever they have to say will be more palatable or plausible coming from a fellow human. Sometimes, the emissary themselves is special in some heretofore-unknown way. Or, maybe the god just wants their calls screened.

Whatever the reason, the emissary will rarely be grateful for the honor. Fits of existential frustration and insecurity are common- after all, what need does a god have for a human? Emissaries may also fear that they've gone insane, or be subject to assassination attempts by jealous dogmatists. Sometimes the god is temperamental, or drags them far from home. Frequently, such stories are focused on the emissary's cross-purpose yet friendly relationship with the divine.

Emissaries are usually Badass Normal, protected only by "coincidence" or magic on loan from their god. Incorruptible Pure Pureness is, of course, a job requirement. An emissary's Mission from God, if they have a specific one, is always diplomatic—anything else is a last resort. They may be nominated to inform the populace that God Is Displeased, or that trope may result from an emissary being ignored. Unwanted False Faith can also be a related trope, when the emissary's audience is unable to see the forest for the trees. Usually this trope happens to mortals, but can occasionally happen to an angel or other less mortal race.

Super-Trope for The Chosen One, since this emissary doesn't have to be foretold or born for the mission.

Looks like this trope but isn't: Mouth of Sauron (the spokesman for an evil deity or organization who isn't empowered to act independently or speak their own mind), Pals with Jesus (when the god wants companionship, not an employee), The Chosen One (a mortal chosen to do something other than intermediate), Seers/Oracles (someone who can see the future, and may or may not receive that power from a deity), Symbiotic Possession (the god wants a collaborator and won't do full-blown possession lasting more than an emergency few minutes), and Witch Doctor (a ritualist who compels higher powers to help them, instead of the other way around).