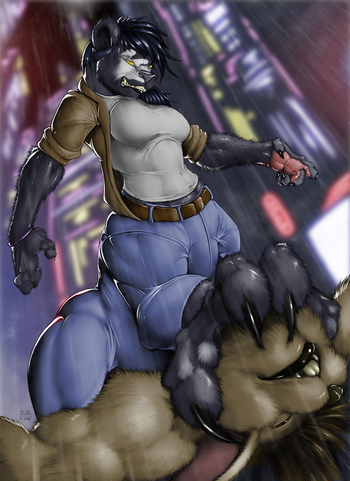 Feyrin is not in the mood today
Advertisement:

A pair of novels set in the Hc Svnt Dracones RPG setting written by Josh Vogt.

700 years after humanity wiped itself out in a nuclear war, their genetically engineered "Vector" descendants maintain their Megacorporations as they colonize the solar system. While the Privately Owned Society of Sol is near-utopian for some people, there are always those who slip through the cracks. These are their stories.

In Fate's Fangs (published 2016), taur sex worker Nadia finds herself on the street after one of her clients drops dead during a session, while the health corp she moonlighted at denies her existence. Upon being saved from a corporate hitman by a transient mercenary she starts to unravel the mystery of what skulduggery the corps are up to in her town.

Blood in the Mist (2019) follows Inner Ring Police Force commander Rio Dem'la Ca'Wo as she investigates the group suicide of a dozen cult members. Can she figure out their leader's plan in time to save the city? Can she trust the voice she's begun to hear in her own head?

Tropes found in Blood in the Mist: