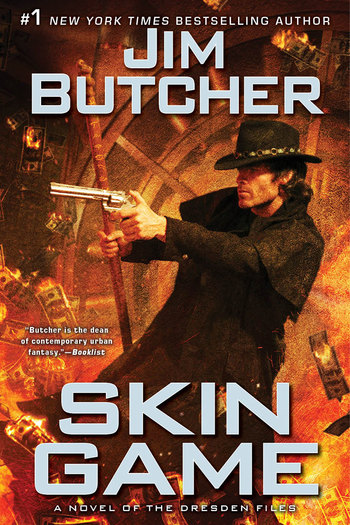 Skin Game is book #15 in The Dresden Files.

The one where Harry teams up with the bad guys to rob two vaults.

After the events of Cold Days, Harry Dresden finds himself in a bad position: the parasite in his head is growing quickly, to the point that it's very close to killing him. On the one hand, as the Warden of Demonreach, he's safe on the island, and Demonreach is helping him by suppressing the pain the parasite is causing him. On the other hand, as a result, Harry can't leave the island, and none of his messages to Molly are getting through. Then, of course, things get worse: Mab shows up, and she's got an offer he can't refuse for him.

The offer? She's loaning him to the leader of the Order of the Blackened Denarius, Nicodemus Archleone, as part of a team Nicodemus is forming to rob Hades' vault. Naturally, Harry's not exactly jumping to accept, but if he refuses, Mab will do nothing... and the Parasite will not only kill him, but once it's free, it'll go after everyone he cares about, starting with his daughter. But there's a twist: Mab doesn't just want Harry to go help Nicodemus rob the vault. She wants him to help Nicodemus rob the vault... and then screw him over in any and every way possible. Sounds simple enough.