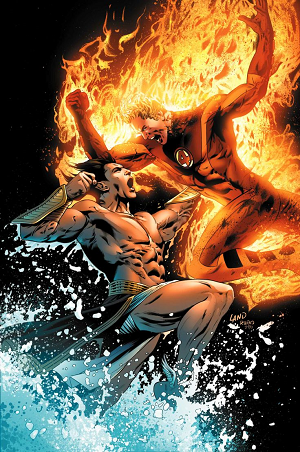 "Man once again faces the war for the dawn, which has been waged since time began. On one side is the Lord of Light, the Heart of Fire, the God of Flame and Shadow. Against him stands the Great Other, whose name may not be spoken. The Lord of Darkness, the Soul of Ice, the God of Night and Terror."
— Thoros of Myr, Game of Thrones
Advertisement:

One of the easiest ways to put emphasis on two rivals is (if the context's right) to give them contrasting Elemental Powers, usually matching their character.

The most common couples are Fire for the hot-blooded one and Water or Ice for their cool-headed rival. Light and Darkness are also extremely common, especially between the Big Good and Big Bad. In anime and manga the pairing Thunder and Wind is frequent, referring to Buddhist and Japanese Mythology. Other rival elements usually include Metal and Nature (as Cold Iron demonstrates), Earth and "Sky", Moon and Sun.

Of course, the "rivals" aren't always enemies. Usually, they can be friendly rivals or even siblings, but make sure the elements are ones that would be in natural opposition before you add an example. (Rock and Dirt, for example, are too similar.)