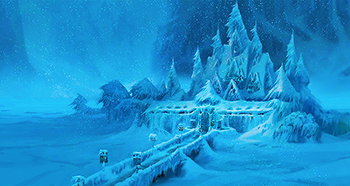 The cold never bothered me anyway...
"Thousands of years ago there came a night that lasted a generation. Kings froze to death in their castles, same as the shepherds in their huts, and women smothered their babies rather than see them starve, and wept and felt their tears freeze on their cheeks."
— Old Nan, Game of Thrones
Advertisement:

An artificial winter that is intended to last forever, or at least a very long time.

Winter is usually considered the least desirable season: the short days and cold weather can be deadly to humans and animals alike, and no food can be grown. Because of this, causing a winter that never ends is a common goal for a villain.

Of course, not only villains have this in their bag of tricks. Sometimes a character or object causes this just by existing. Such a character is not necessarily a villain, but will often be an antagonist nonetheless. Expect to see a member of The Fair Folk or another creature with Blue-and-Orange Morality in this role.

In more realistic works, this might be caused by enough material in the atmosphere blocking off the light of the Sun, such as that from nuclear or volcanic fallout or the result of a large enough meteor striking the Earth. In Speculative Fiction, it's more likely to be the work of aliens or a wizard.

Places that have naturally long winters, like ice planets, are not examples. Can be caused by an Empathic Environment or a Fisher King.

A Sub-Trope of Weather Dissonance and Sister Trope to The Night That Never Ends and Spring Is Late. Not to be confused with Frozen in Time. For truly apocalyptic cases of this, see Glacial Apocalypse.