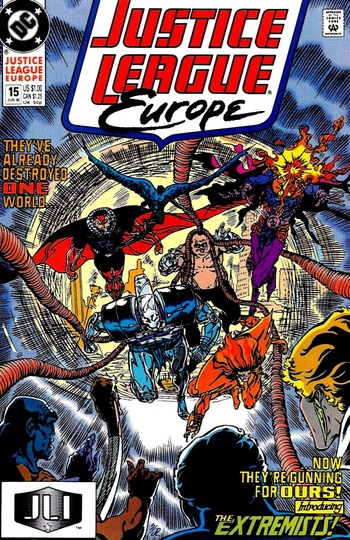 Blue Jay and the Silver Sorcerer escaped from their prison at Soviet Russia. The SS returned to their dead world, and BJ tried to get asylum with the Justice League. But once in her world, she is attacked by the Extremists, the villains that caused the nuclear apocalypse, and Dreamslayer takes from her the knowledge of how to open a portal to DC's universe. They wreak havok in Soviet Russia, defeat the JLE and leave. Dr. Diehard takes control of all the nuclear warheads in the world and takes them to the sky, to force the world into submission. The JLE attacks them a second time, and Dreamslayer vanishes them to their dead world. Once there, they discover that the real extremists died in the nuclear war, that those are just robots made at a self-sufficient community of robots created for running a theme park. The mere sight of Uncle Mitch, their creator, caused the extremists to fall down to their knees, and they let themselves be deactivated. All except Dreamslayer, who was the real deal...