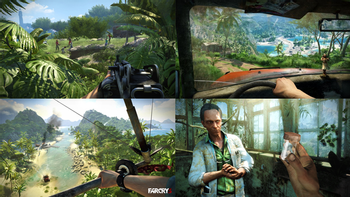 Whether you're shooting, driving, hang-gliding or holding mushrooms in jars, you'll be doing it in first-person here.
"I’m fond of how the game retains its focus on Jason’s internal journey by never leaving his first-person perspective, which is great for dream sequences but not so much for vehicle sections."
— Zero Punctuation on Far Cry 3 (right), highlighting both the strengths and weaknesses of this trope.
Advertisement:

It is relatively unusual for a modern video game to use a single camera perspective for the duration of the game. Most modern games tend to interrupt the gameplay with cutscenes to provide exposition and advance the narrative, which will typically shift to different camera perspectives than those used in the core gameplay, and be presented much like an animated film. Other games may change camera perspective in gameplay: for example, sequences in which the player character is on foot will be depicted from a first-person perspective, while sequences in which they are driving will be depicted from a third-person perspective.

Some designers avoid this, however, opting for an alternative approach, in which the camera never shifts from the first-person perspective of the player character(s) for the duration of the game. All gameplay will be from the perspective of the player character(s), as will cutscenes (if any are featured). In effect, this trope is the video game equivalent of a consistent use of the First-Person Perspective throughout a novel.

Reasons for this trope differ. Older games such as Doom or Wolfenstein 3-D featured very little in the way of narrative, so there was rarely much need for cutscenes at all (not to mention that the technical limitations of the engines in question probably forbade frequent shifts in camera perspective). In more modern titles it's typically done as a deliberate aesthetic choice to foster a closer, more immersive relationship between the player and the player character (particularly if the player character is an Audience Surrogate and/or Featureless Protagonist; see also Player and Protagonist Integration). In the latter case, games of this type will sometimes avert First-Person Ghost and/or make use of Diegetic Interface for the same reason, or have the player character be a Silent Protagonist to allow the player to project their personality onto them. They may also make use of tropes like Expository Gameplay Limitation, Controllable Helplessness and Scenic Tour Level to provide exposition without breaking the camera perspective.

This is primarily a Video Game trope, as per the description, but there are rare examples in visual media of works which use POV shots for the duration of the work (some are even examples of The Oner). Found Footage Films by definition aren't an example of this, as they don't purport to be POV shots from the perspective of a particular character but rather from the perspective of the In-Universe Camera the character is using.note There are occasional video games listed below which attempt to emulate the style of Found Footage Films, and which are examples of this trope, however. Don't list literary examples - those can go under First-Person Perspective.

This trope can be used in video games to allow The All-Concealing "I" to hide basic details about the character you're playing as.