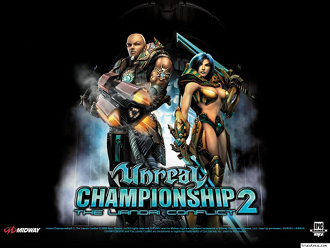 It seems like the Nakhti dislike clothes.
"From the wind swept barrens, from their breathtaking ocean cities, they come. Brave warriors gathering forth in Noble Tradition, battling for Ascension. The greatest among them will be crowned Emperor. Today, with the sponsorship of the Liandri corporation. this tournament enters the twenty fourth century. Welcome to a perfect combination of Ancient Tradition, and high-tech bloodsport. Welcome to the Ascension Rites."
Advertisement:

Unreal Championship 2: The Liandri Conflict is a first-person/third-person Hero Shooter, the seventh game in the Unreal seriesnote Eighth if you also count Unreal Mission Pack: Return to Na Pali, and the second console-exclusive game of the Unreal series, also for Xbox, after the original Unreal Championship. Released in 2005, it was developed by Epic Games, and was also the first Unreal game published by Midway Games, otherwise known for the Mortal Kombat series.

The game is notorious in the series for its departure from the First-Person Shooter formula. Its combat system has a strong emphasis on melee combat and mobility, to the point of having a wider moveset and more adrenaline abilities than those of Unreal Tournament 2004, with the player being able to alternate first-person (non-melee mode) and third-person (melee mode) views. Each melee weapon has an alternate fire which can stun the opponent, a requirement to do the Coup De Grace. And, unlike other instances of the Unreal franchise, each character is radically different, with weight classes (light-medium-heavy), starting meleé and ranged weapons, different adrenaline abilities and a custom Coup De Grace.

Basically, Unreal Championship 2 can be described as cross between an FPS and a Fighting Game. In fact, the character roster includes a Guest Fighter in the form of Mortal Kombat's own Raiden, alongside Shao Kahn as an announcer.

The story focuses on the Nakhti empire, an Egyptian-based civilization whose Ascension Rites' Tournament decided who was the one who would rule the Empire. It has the player taking the role of Anubis, a member of the Imperial Legion, while he tries to stop Selket from becoming the Emperor. He's one of the first people to be aware that she's a puppet of the Liandri Corporation, who wants to control the Nakhti people. So, Anubis and his friend Sobek sign up for the Tournament in order to stop her.