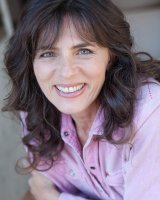 Mira Furlan (7 September 1955 - January 20th 2021), born in Zagreb, Croatia, has been cited as the greatest acting talent Croatia has ever produced — and one look at her demo reel will tell you that is not an Overly Narrow Superlative! Best known to English-speaking viewers for her work on Babylon 5 as Ambassador Delenn and Lost as Danielle Rousseau, Furlan has also amassed a considerable number of film and television credits in both her native Croatia and in the United States. Before her breakout role as Ambassador Delenn, she was a member of the Croatian National Theatre and had already appeared in multiple Yugoslavian productions.

She and her husband, director Goran Gajić, emigrated to the States in 1991 to escape the boiling ethnic tensions in their home country. This would later fuel her acclaimed B5 speech in the episode "Severed Dreams", where her furious speech to the Grey Council was infused with Furlan's own rage against the European powers who failed to aid the Balkans as civil war erupted. After more than five years on Babylon 5 and its assorted films, she returned to Croatia in 2002 to take the lead in the Ulysses Theatre Company's Medea, but soon returned to America yet again to play Crazy Survivalist Danielle Rousseau from 2004-2008.

From 2008 she guest-starred in well-known shows like Law & Order: LA and NCIS, as well as Croatian television, film, and theatre. She continued to make convention appearances, including ComicCon and MegaCon, at fairly regular intervals.

Incidentally, she also sang; she was a member of Babylon 5-based band The Be Five, along with Claudia Christian, Peter Jurasik, Bill Mumy, and Andreas Katsulas, and became a cult favorite among Fivers for her smoky alto.

She also had a long-running series of columns in the now-defunct Croatian magazine Feral Tribune; these were published in a (sadly Croatian-language, for her fans in the States and elsewhere) book in 2010. Her official website is MiraFurlan.net.

Mira Fulan passed away on January 20th 2021 from complications of a long bout with West Nile virus.