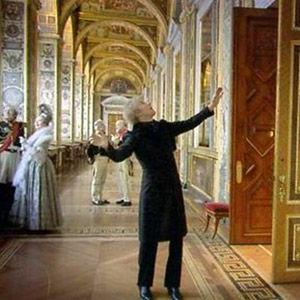 Russian Ark is a 2002 film from Russia, directed by Alexander Sokurov.

The film follows an unseen narrator and his guest, a Frenchman named Custine, through the Russian State Hermitage Museum in Saint Petersburg as they talk about the history of the city and the artifacts within the museum, bouncing around in time from the modern day to Joseph Stalin's era to Tsarist Russia and back again.

Russian Ark is something of a miracle in filmmaking: The entire film (around 93 minutes, excluding the credits) was shot using a single Steadicam in one continuous, uninterrupted take. When you realize that this film has over 2,000 actors in it, this feat becomes even more incredible.